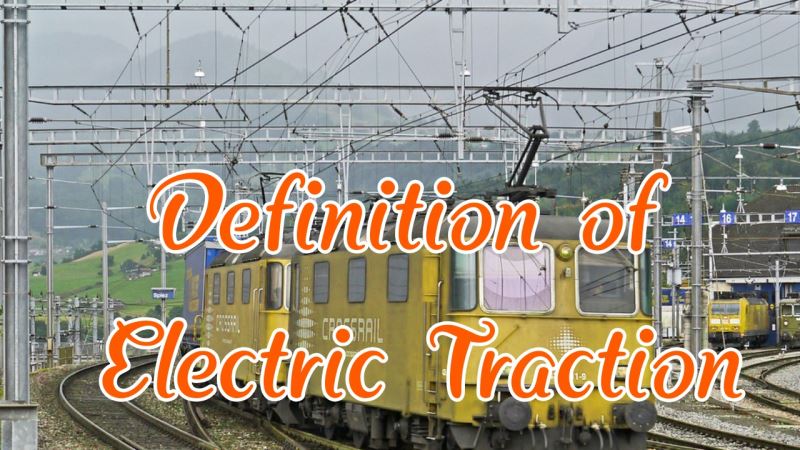 Friends, in this post you have been explained in detail about the electric traction system and its work. This post is very important for your upcoming exams, because in this post you will get information about all the important questions that are useful for you.

Electric traction system consists mainly of 3 parts, which are explained to you below-

Through this method the train is driven by a steam engine. The use of this system in India is almost over because the electric traction point has now been upgraded in sufficient quantity.

It is a system that can be run anytime on the route where the available rails used for it should be. Its efficiency varies from about 6 to 8%, But by applying the condensation system, its efficiency can be increased by about 15%.

This type of conduction uses an electric engine to drive the train. In electric locomotives, direct current range motors and a phased alternating current motors are used. Electrical energy is passed directly to the motor by the e-vitran line above the head by sliding contact and the car is driven by the force generated in the motor.

The system is also available for underground rail. The following five systems are used for route electrification-

In this system sufficient force is obtained by direct current class motors to drive the vehicle. The value of voltage in a train connecting rod is from 1500 voltage to 3000 voltage, But many electrical substations are used to power the system.

Voltage values ​​range from 1500 to 3000 voltages in suburban railways and sub-stations are provided by alternating current voltage feeders from 33 kV to 100 kV.

Using the following recurring supplies in the same range of motor gives the quickest change. But at the same time the power multiplier improves and the efficiency increases. The rail tracks act as the return path of the current and due to the high voltage, the current value is reduced.

In mines, etc., where a special type of gas is present, it is necessary that sparks are not generated while collecting current from over-the-top contact, hence the power is obtained from two stream cables. The frequency value in this method ranges from 2500 to 3000 Hz.

An energy receiver placed at about 4 centimeters from the cable is induced by alternating current which is converted into direct current by rectifier. The D.C. thus obtained is used in the connecting motor.

In this system, the induction motor is supplied at 3.3 kV and 16 -2/3 frequency by two overhead drivers and three phase supplies by the tracks.

Micro-speed control is also not possible in an induction motor. At low frequencies, the initial thrust of the induction motors increases and the current decreases. Speed ​​control can also be done easily by supply change.

The appropriate D.C. in the connecting rod And A.C. Characteristics of motor –

The following braking systems are used in electric traction –

How To Use Microsoft Word For Free In 2021

1 thought on “Best Electric Traction Definition and system of 2021”